It looks like the battle for GMO labeling is really heating up in California! Why is this important? If the residents of California can persuade their legislators to pass a bill to get food packers and processors to label food containing GMOs, then legislators in other states are much more likely to follow suit. All the "Right to Know" bill does is give consumers the right to choose whether to purchase and eat GMO foods or not. It does not affect farmers, it does not affect food producers, it just adds a label like a K does for kosher food. It's not hard. 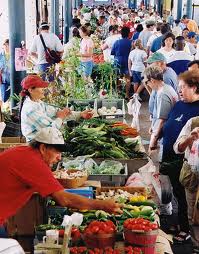 The demand for organic, non-GMO food grows daily. Farmers and vendors are more than willing to meet this demand- image by Andrew Ciskel

Monsanto is fighting back, saying that this is ridiculous legislation, because  "to require labels on virtually all processed foods as possibly containing GMOs, because of widespread use of genetically modified soy, corn, canola, cotton, sugar beet and alfalfa seed, amounts to meaningless disclosure."  That's right, folks, virtually all processed food that we can buy at the grocery store is made from genetically engineered ingredients.


Read this post from the Organic Consumers Association. We need to know how Monsanto is arguing against this legislation so we can be ready to talk to our own representatives. I've copied it for you under the Fair Use Agreement:

Web Note: Apparently too many critical comments inspired the Sacramento Bee to remove the comments feature from the article in question. Please contact them and let them know your opinion on this issue.

You can't argue with consumers' right to know what's in our food. That's why 9 out of 10 people support labels for genetically engineered food.

But, money talks, and companies like Monsanto that have gotten rich hiding GMOs in our food are already on the attack in California, where a movement to label GMOs is working to get the issue on the November 2012 ballot.

Monsanto found an ally in Dan Morain at the Sacramento Bee who tried to find fault with the CA Right to Know/Label GMOs coalition.

Here are Morain's points, along with our rebuttal. Please go to the editorial, scroll down and add your comments. (See Web Note above.)

Guided by common sense, Dan Morain can't help but to agree with us.

But, then he lets Monsanto's spin distract him from the simple fact that GMO labels protect our right-to-know...
The CA Right to Know/Label GMOs coalition consists primarily of non-profit sustainable agriculture organizations, as well as natural, organic and non-GMO businesses, many of whom are based in CA, and all of whom have a large base of members and customers in California.
We're very proud to have the financial and educational support of Dr. Mercola, and we encourage everyone interested in learning more about natural health and the potential health impacts of consuming genetically engineered food to visitMercola.com. But, that's not what this initiative is about. It's about the right to know. All we want are labels.
This isn't about farmers. It's about packers and processors. Packers and processors have to follow labeling laws.

It isn't about litigation, either. Consumers already have the right to sue to enforce California's food labeling laws. This initiative can't change that one way or the other. All it can change is what gets labeled. Again, 9 out of 10 people think GMOs should be labeled.
Morain thought he had a clever way to undermine support for the initiative proposition that GMO foods should not be marketed as "natural." He took a talking point straight from Monsanto's playbook - only he didn't get the point.

What spokespersons for Monsanto and the agricultural biotech industry usually say is, to require labels on virtually all processed foods as possibly containing GMOs, because of widespread use of genetically modified soy, corn, canola, cotton, sugar beet and alfalfa seed, amounts to meaningless disclosure. Morain must not understand what genetic engineering is. He heard that "virtually all processed foods" would have to be labeled and somehow he figured this was because of the way they were processed. Morain doesn't get that almost all processed foods contain ingredients that are genetically engineered.

If everyone knew that all the processed food they were eating contains GMOs, labels would be meaningless, but in the United States, a country where virtually everyone is eating GMOs, only about one quarter of the population is aware of it. In this context GMO labels are anything but meaningless.
Again, the CA Right to Know/Label GMOs initiative isn't about the merits of GMOs. If genetic engineering is so great, its proponents should agree that food labels are a good idea. Of course, the fact is that Monsanto and the other agricultural biotech companies don't want you to know about GMOs in your food because they don't want you to wonder whether it's safe.

Newell-McGloughlin's statement that "[t]his is tested so thoroughly," would lead the reader to believe that independent scientists who work for public research institutions are carefully safety testing each new GMO before it enters our food. On the contrary, the government's policy that there is "no material difference" between GMOs and normal foods obviated the need for review. Companys that want to market new GMOs don't have to prove that they're safe, only that they are similar to normal foods - and they get to do their own research.

In the case of GMO salmon, for instance, the applicant, AquaBounty, submitted data to the FDA that showed their genetically engineered salmon was less nutritious, more likely to trigger allergies and had higher levels of a hormone linked to human cancers than normal salmon. The FDA noted this, but concluded that it wasn't different enough from normal salmon to be blocked or even labeled.

But, that discussion isn't even relevant to this issue of GMO labels. Safety tested or not, genetically engineered food should be labeled.

For more information and to volunteer to help collect signatures for the California Ballot Initiative to Label GMOs go toOrganic Consumers Fund.
Posted by Donna at 4:15 PM