Just How Bad is Fluoride in Drinking Water?: Fluorosis in Teeth

Before I get into the body of this post, I want to give a warm welcome to all of my new subscribers! I am thrilled and honored to have you aboard and hope I can provide you with meaty content that you can take home and use in your real lives.

I got a wonderful response to my post called "Water, Water Everywhere, But Nary a Drop to Drink... From Your Tap, That Is!" People from all over the U.S. made comments on Facebook and Google+ telling me all the "gross stuff" they were finding in their city's tap water. I got into an insightful discussion with an environmental scientist in Iowa who told me how the EPA slaps nasty fines and legal action against cities who do not comply with the federal guidelines for safe drinking water. Then he said, "... but their idea of safe and our idea of safe may not be the same thing."  He said clean water doesn't come cheap, and it is up to the voters within each city to bring pressure to bear on their city officials to ensure the cleanest tap water possible. They can and will do it, if the voters are willing to pay for it. I'd like to challenge the readers of Bluebonnet Natural Healing Therapy to lead in taking civic action to clean up our water supply.

One of the ways many of us can lobby for clean water is to get our city leaders to take the fluoride out of our drinking water supply. Today I want to give you just one reason to remove fluoride from your drinking water: fluorosis in teeth. 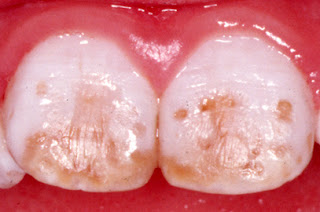 Haven't we all been taught to believe that fluoride reduces or prevents tooth decay? Good parents who are concerned about their children's dental health dutifully purchase toothpastes which contain fluoride, dental rinses and gels containing fluoride, and even prescription fluoride tablets which are supposed to help prevent tooth decay and cavities (caries). On top of this, fluoride is added to city drinking water because it was once believed that doing so reduced the risk of dental caries and tooth decay. The practice of over-using fluoride products has lead to an alarming occurrence of dental fluorosis in children under eight years old.

When children consume too much fluoride while their permanent teeth are developing under their gums, the fluoride actually eats away at the enamel of the teeth. Very mild fluorosis looks like this: 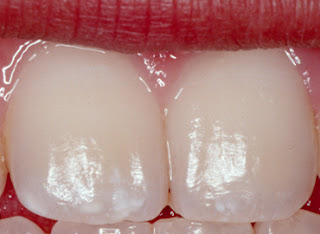 It may be hard to detect very mild cases of fluorosis, but the vertical ridges and the white spots near the edge of the teeth are there. It may be easier to see fluorosis when it looks like this, which is still considered a mild case: 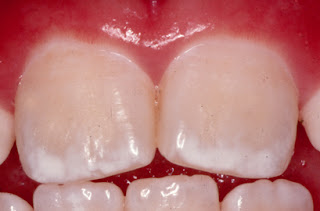 Here the mottled, white edges are quite visible, along with a small amount of enamel erosion. Have you seen children with teeth like this?

While most people would believe that fluorosis is caused by fluoride toothpaste and rinses, the Center for Disease Control and Prevention says that 75% of fluoride comes from tap water consumption. To quote the CDC: "In the United States, water and processed beverages (e.g., soft drinks and [commercially prepared] fruit juices) can provide approximately 75% of a person's fluoride intake."

Here I must ask a question: If fluoride can dissolve children's teeth while the teeth are inside the gums, what is it doing to other tissues, such as bones? The Fluoride Action Network certainly thinks fluoride is dissolving bone tissue, in a fascinating article called "Fluoride and Bone Fracture." In the article, the author gives clear evidence, supported by both animal and human clinical studies, that long-term consumption of fluoridated water causes an increase in bone fractures in all populations.

Do you agree that we need not only to get fluoride out of our drinking water, we also need to stop drinking soft drinks and commercially-prepared juices, energy drinks, and even vitamin waters, because they may contain fluoridated water?